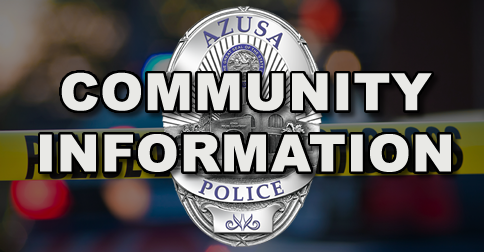 Azusa, CA – On Friday, August 31, 3018, the Azusa Police Department Traffic Bureau conducted a DUI Checkpoint in the area of San Gabriel Ave. and Sierra Madre Avenue. As a result of this operation, 606 cars came through the checkpoint. This checkpoint was staffed by Azusa Police Officers.

Out of all of the vehicles that came through during the checkpoint, 20 vehicles were sent to the secondary check area, 8 citations were issued for California Vehicle Code violations, 2 vehicles were impounded, and 2 arrests were made for outstanding arrest warrants.

The deterrent effect of DUI checkpoints is a proven resource in reducing the number of persons killed and injured in alcohol or drug involved crashes. Research shows that crashes involving an impaired driver can be reduced by up to 20 percent when well-publicized DUI checkpoints and proactive DUI patrols are conducted routinely.

DUI Checkpoints are placed in locations based on collision statistics and frequency of DUI arrests, affording the greatest opportunity for achieving drunk and drugged driving deterrence. Locations are chosen with safety considerations for the officers and the public.

In California, this deadly crime led to 867 deaths and over 23,000 serious injuries in 2013 because someone failed to designate a sober driver. Nationally, the latest data shows over 10,000 were killed by an impaired driver.